A Tale of Two GMTs

The other day, I was attending a seminar when I noticed a rather prominent and impressive watch on the wrist of a fellow attendee. From the unmistakable crown guards, it was evident that this was a Panerai. The morning session of the seminar passed by far more enjoyably after that, as I tried to sneak surreptitious glances at the gentleman’s wrist to determine its model… and then I saw it: an hour hand that was advancing far too slowly to be the “normal” hour hand. This had to be the Panerai Luminor 1950 8 Days GMT.

“Nice Panerai”, I said in the break, and the picture below is the result. It is moments like this that I am reminded of how wonderful this crazy hobby (some would say obsession) of ours is. 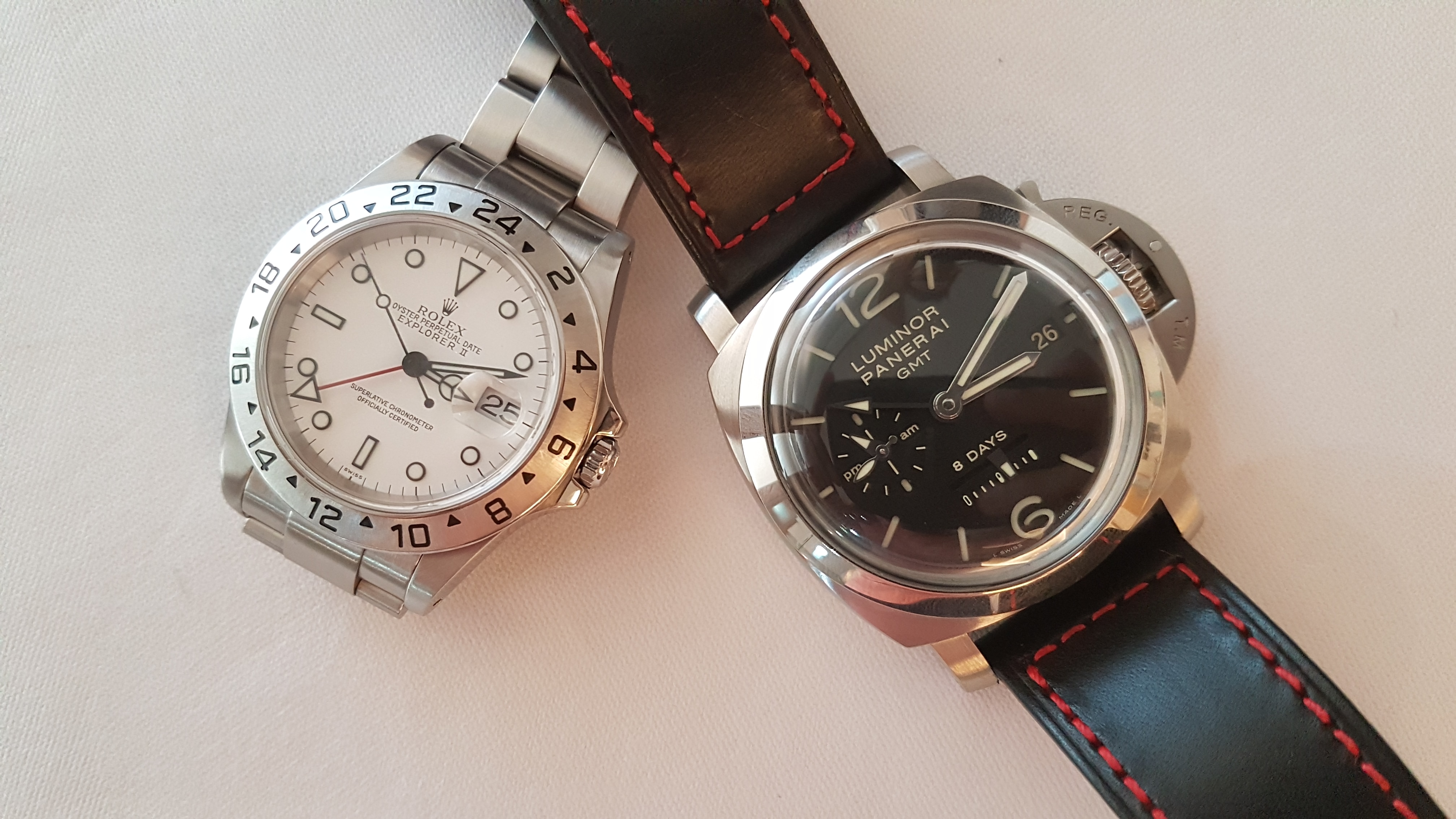 Most people, when first seeing a GMT watch, ask the logical question: “why are there four hands?”

So, what are GMT watches and why are they popular? It was the ancient Egyptians who introduced the 24-hour day, and it was in 1879 that the idea of 24 distinct time zones was conceptualized. Five years later, in 1884, GMT was established, which led to the worldwide standardization of time. GMT stands for Greenwich Mean Time, which is the average time that the sun crosses the Greenwich meridian, and serves as the reference point for every time zone in the world, which scale either up or down as GMT “+” or “-” a number of hours.

A GMT watch, in short, is any watch that allows you to keep track of two different time zones simultaneously.

But the question of why anyone would need such a watch has not been answered.

The year was 1952. The first intercontinental passenger jet airplanes were crossing formerly unthinkable distances in unfathomable times. It was the dawn of a new age, an age of exploration and of travel, an age of pushing the boundaries of what our species thought was achievable. Commercial air travel introduced the chance to travel from time zone to time zone within hours. This had two consequences: one, passengers were introduced to the marvelous feeling of jetlag and two, it became difficult for pilots to keep track of the time at their departure and destination airports.

The Glycine Airman was born out of this professional need in 1953, one whole year before the most recognizable GMT watch in history – the Rolex GMT Master ref. 6542. Fitted with a 24-hour dial, with the primary hour hand geared in such a way that it made one circuit every 24 hours, the Airman also came outfitted with a bi-directional, un-ratcheted bezel hat could be set at any positions to account for “nonstandard” timezones like New Delhi, which lies at GMT+5:30. The 24-hour bezel could be rotated (and then locked with the crown at 4:30) so that you could align the local hour hand with the current GMT time, allowing you to easily read off two time zones at a glance. In 1954, the airline Pan Am approached Rolex to design a GMT pilot’s watch, and in 1954 the GMT Master, with its now-classic four-hand layout, was born. The rest is history, and the GMT complication’s place of honor in any watch collection was cemented.

Standard watches keep 12-hour time. The second hour hand (the GMT hand) is geared in such a way that it travels at half the speed of the primary “local” hour hand. Thus, instead of two rotations around the dial in one day, the GMT hand will make one stately turn, thus allowing you to keep trac of the day / night cycle of your home time, preventing you from waking up friends and family as a result of an erroneous calculation of the time difference. Initially, the GMT hand could not be set independently to the primary hour hand and the only way to read a second time was to align the bezel with the “home” time hour hand. 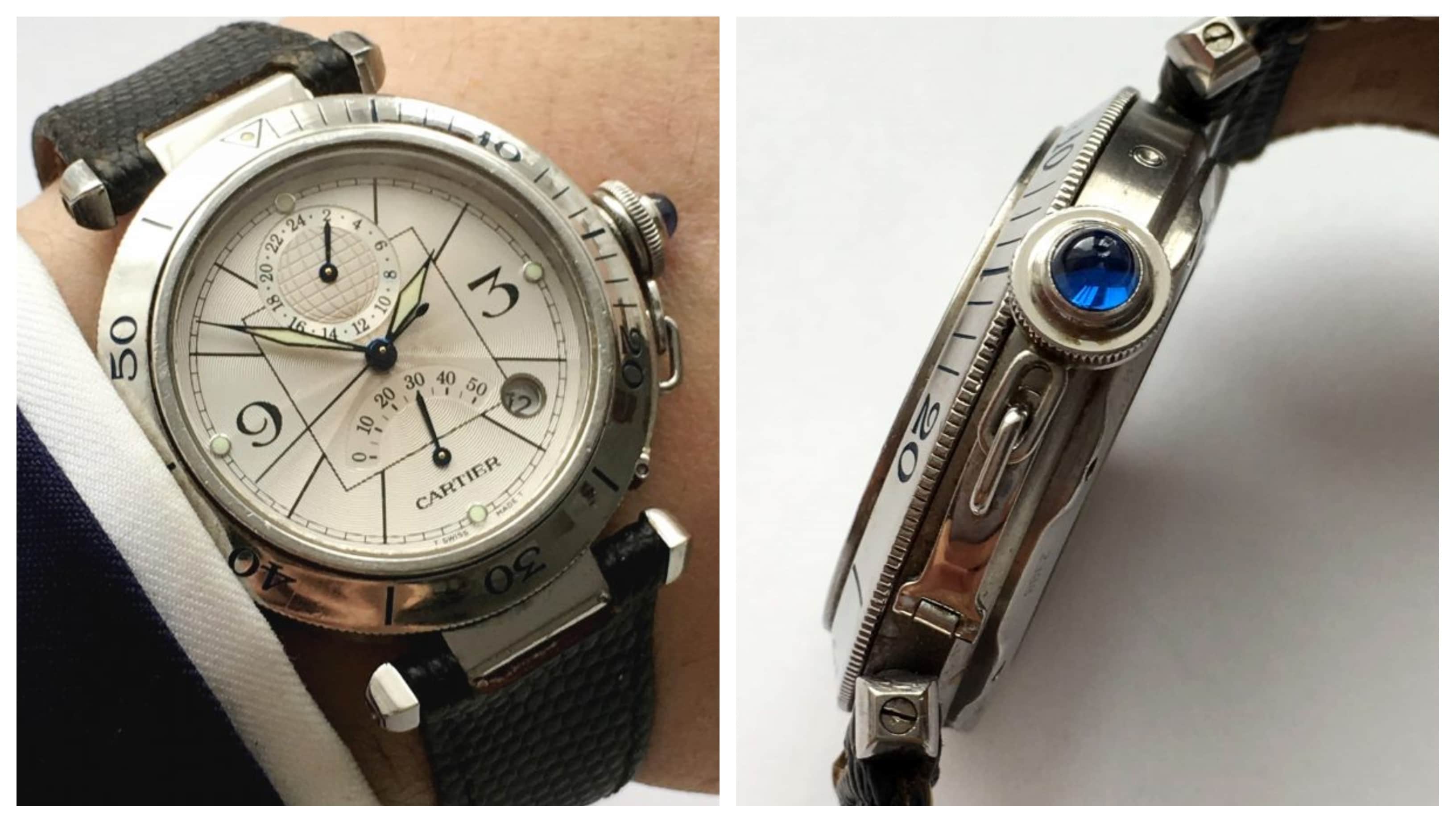 There is no denying that times have changed. Technology is readily available and, at the touch of a finger, we can look what the time is in any city in the world on our smartphones. Still, the GMT cmplication remains a perennial favorite of frequent travelers and of people who must keep in touch with far-flung places, either for business or simply to call their loved ones. More than that, however, the GMT complication reminds us of our history as human beings and of the grand feeling of adventure and exploration.