Caliber 33,3: The Ancestor of an Icon

Take a moment to look at the following auction results for lots sold by the renowned auction houses Christie’s and Phillips over the last five years:

Looking at the hammer prices, it’s easy to think these results are for vintage Patek Philippe or Rolex references. You might be asking yourself: What ties the above references together?  The answer lies in the caliber the above references share: cal. 33,3, which Omega manufactured in a run of close to 20 years and which serves as the predecessor of one of the most revered watch movements of all time, namely the Omega cal. 321, the movement that famously powered the Moonwatch. Though Constellation, Seamaster, Deville, and Railmaster are all respected models in their own right, the Speedmaster is undoubtably Omega’s most popular (and certainly its most famous) watch.

Let’s take a step back, shall we? In a past article, we delved into Omega’s illustrious history as a manufacturer of not just watches but of precision timekeeping instruments, a history that culminated with the company’s success with the Constellation. It is a legacy that continues today, and Omega remains a pioneer in the use of advanced materials in watchmaking, as seen in the company’s use of non-ferrous materials in its co-axial movements, which are housed in zirconium oxide cases manufactured with diamond-tipped tools.

It’s time for a brief history lesson: In 1930, Omega and Tissot merged to form the SSIH group (Société Suisse pour l’Industrie Horlogère) with the aim of marketing high-quality Swiss watches. Omega would maintain its position in the medium-high luxury segment and Tissot would target the medium market. Over the years, the company acquired a number of Swiss brands and movement manufacturers, including Lemania in 1932. Lemania, a watchmaking company founded in 1884 that is now part of the Swatch Group, gained far more fame for its high-quality ébauches (in watchmaking, èbauche is the general term for the base movement, including plates, bridges, and mainspring barrel, which were purchased by watchmaking companies and modified to create their own movements) than for its watches.

In the late 1970s, SSIH became insolvent due in part to a recession and in part to heavy competition from inexpensive Asian-made quartz crystal watches, despite at that time being the world’s third largest producer of watches at the time. Corporate restructuring and several mergers led to the creation of the holding company we known known as Swatch Group.

The improvements did not stop there, and in 1942 the movement was further improved to offer anti-shock (see below) and anti-magnetic properties. A new version for water-resistant chronographs spun off in 1949 before the end of production of the movement in 1952. In parallel, in 1949, after a number of modifications to these predecessor movements, the Lemania cal. 27 was born. 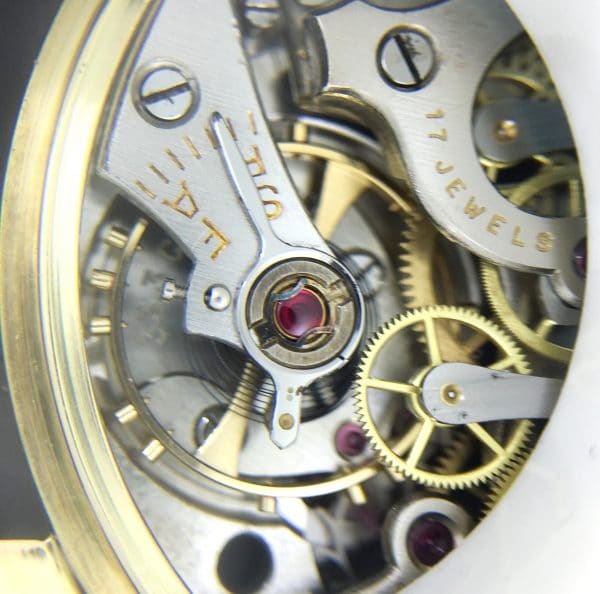 This caliber is known under a far more famous name: cal. 321. This is the immortal caliber that was used in the first 11 years of Speedmaster production and was also the caliber found in the Moonwatches that were used for the Apollo moonwalks. The later evolutions (cal. 861 and 1861) were characterized by a cam-actuated chronograph system rather than a column wheel, which, though far more labor-intensive to manufacture, has a far crisper actuation and tactile feel than a cam-driven chronograph.

The connection to one of the most famous chronograph calibers of all time certainly makes the cal. 33,3 interesting from a collecting standpoint. Another reason is the relative scarcity of the movement:  In the roughly 20-year production run of the cal. 33,3., only 13 700 are believed to have been produced. Lastly, the cal. 33,3 is a large movement. It can trace its lineage directly to its pocketwatch predecessors of the past and, at 37.5mm, these watches dwarfed other contemporary chronographs, which generally measured 34-35mm. To this day, due to their complicated dials in conjunction with their size, cal. 33,3 watches have a remarkable wrist presence.

The Omega archives list a total of nine references that were manufactured with this caliber, and there is only one picture in the online archives, namely of reference CK2077. 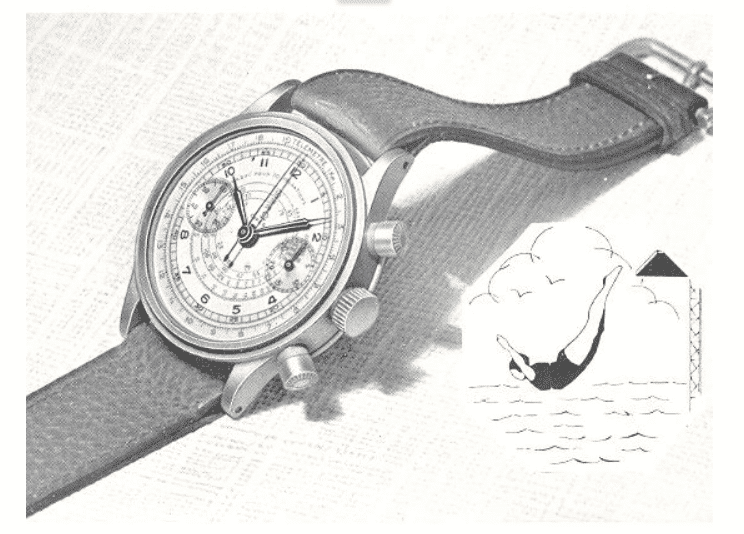 Though there are no complete records of all the cal. 33,3 dial variants manufactured, the chronographs very commonly featured colorful scales that could be used to velocity, distance, and frequency. The sports chronograph has in today’s age become a fashion statement more than a tool watch. What many people forget is that these watches were born out of necessity – wartime saw chronograph telemeter scales used to more accurately gauge the distance of enemy artillery units; pulsometer scales could be used to determine a wounded soldier’s heartrate. Motorsports led to the poplarity of a tachymeter scale, with which you can measures the velocity of a moving object over a standing kilometer or mile.

The complicated and colorful dial variants make cal. 33,3 watches extremly desirable: here, two dials with telemeter scales and one with a tachymeter

In short, the references that feature the cal. 33,3 are a rare breed: they combne rarity, impeccable pedigree, and dashing good looks in a package that is incredibly attractive from an investment standpoint, and these watches have seen incredibly strong price appreciation. With the strong push toward sub-40mm wristwatches gaining more traction year by year, it is very likely that this modern classic will continue to grow in value.