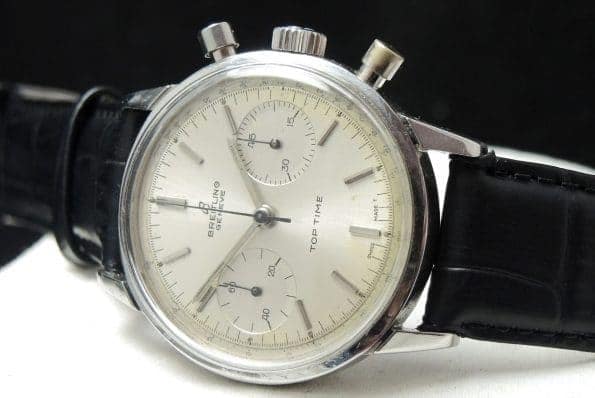 An amazing Breitling Top Time 38mm in Steel with Silver Dial, Silver Indices and Hands and with round pushers

What watch does James Bond wear? There is a good chance that even if you have no interest in watch collecting as a hobby, you will answer with one of the following: Rolex or Omega.

007 has worn quite a few watches throughout his long and storied career, starting with the Ref. 6538 Submariner in Dr. No. to the transition to the Omega Aqua Terra 150m  and Seamaster 300 he wears in the 2015 movie SPECTRE.

In 1965’s Thunderball, Bond has a run-in with another Swiss giant: Breitling. While on his mission to find two NATO atomic bombs stolen by SPECTRE, Bond is given a crucial piece of equipment by Q: a Breitling Top Time that also functions as a Geiger counter. The story of the prop watch used in the movie (believed to be the only one ever produced) is even more fantastical than any of Bond’s many own adventures.

The original prop used in the movie, a Ref. 2002 manufactured in 1962 and later modified for the film by the costume department, was found at a car boot sale in 2013. After it was acquired for the paltry sum of $30, it went on later that year to be auctioned at Christie’s for more than $160 000.

007 might well be the most famous character to wear a Breitling Top Time, but he certainly wasn’t the only celebrity to wear one! Sid James wore a Panda dial Top Time in the 1973 movie “Carry On Girls”, and – true to Breitling’s reputation for being a manufacturer of truly rugged and functional “tool” watches – was worn by the triple Olympic alpine skiing champion Jean-Claude Killy during the 1968 Winter Olympics.

The Top Time had a production run of around ten years and went through several iterations: the first models produced between 1964 and 1967 featured a 38mm diameter monocoque case and were powered by the famous Venus cal. 178.

Later models switched to snap-on casebacks and transitioned to the Venus cal. 188 and Valjoux cal. 7730, 7733, 7736. All are iconic 17 jewel, horizontal clutch chronograph calibers that operate at 18000 bph, but what sets the Venus cal. 178 apart from the rest, is its column wheel function selector. The Venus cal. 188 then switched to a cam-actuated system, which was modified, refined, and rebranded Valjoux after Venus was acquired by Valjoux after the former ran into financial difficulties. 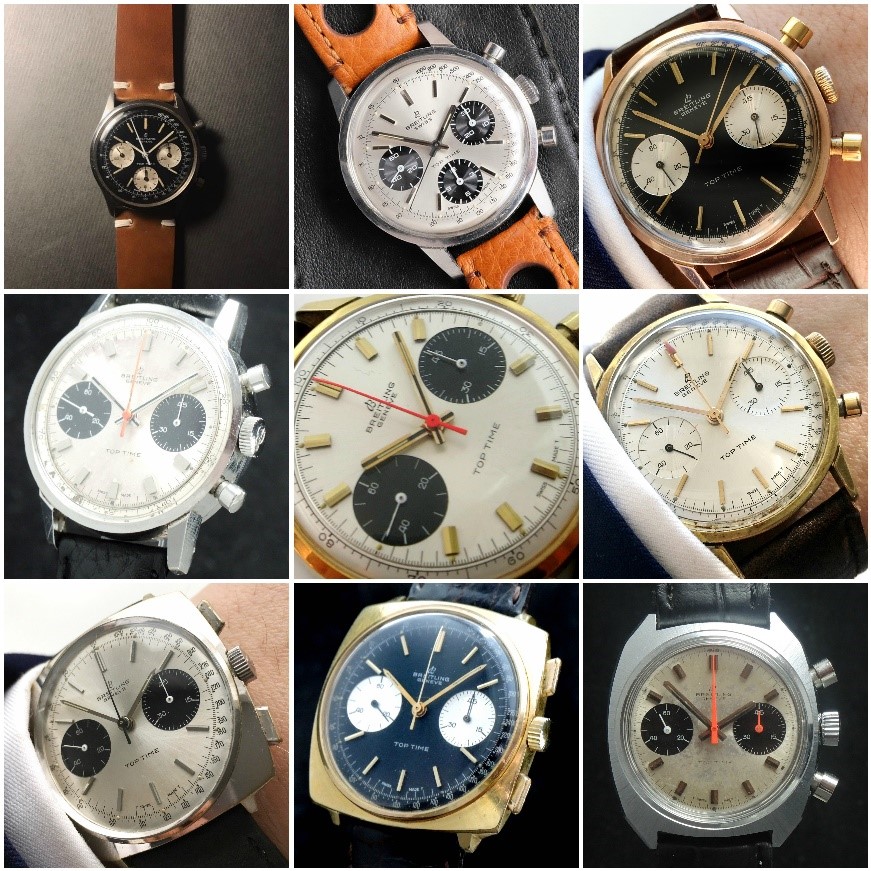 In order to cater to the young target audience, Breitling also decided to manufacture the Top Time with a large number of dial color combinations.

You will find the Top Time in three dial configurations: the original references were released with either a silver sunburst or a reverse panda (black dial, silver subregisters). Breitling’s first watches with the “true panda” dial were introduced two years after the release of the Top Time. The black subregisters on the silver dial remains a classic chronograph look and it easy to see why these references are some of the more sought-after.

Also, there is an equally large variety when it comes to case materials, with stainless steel, solid yellow and pink gold, and gold-plated models available, and case shapes, with both the traditional round, square, and cushion-style cases on sale in the market. In short, there is a Top Time variation for every taste!

Best of all, these gems can be found at a very attractive price point unlike other iconic vintage chronographs from the 60s. Good-condition examples of the Ref. 810 in either the all-silver or reverse panda dial variations will command higher premiums, but even then, you will top out around $5 000. Working your way down the price spectrum, you will find various Vajoux-powered Top Time references listed around $3 000 – $4 500. Here, the price ultimately depends on the condition of the case and movement, and of course the case material. Solid gold cases will sell for higher prices due to their lower production volumes, and in general, steel watches are more desirable than their gold-capped counterparts. Rounding out the bunch, the cushion-case references (Ref. 2006 – Ref. 2009) can be found for as little as $1 800.

So there you have it – a fantastic opportunity to own a piece of chronograph history, packaged in an incredibly attractive modern-size case, at an unbeatable price. Don’t miss out!

Posted in Vintage Uhren.
Share
←  NewerJLC Memovox – The Return of the Timeless Complication
Older  →Passion for vintage watches is a good investment for the future…