Long before Omega made a name for itself exploring the uncharted depths of the ocean with the 1948 Seamaster, decades before the legacy of the Moon Watch was born, Omega set out to conquer time itself by building ever-more accurate movements. In 1931, at the Geneva Observatory trials, Omega broke the record for precision in all six categories, achieving a clean sweep at the competition. To celebrate the accomplishment, the company adopted the slogan “Omega – exact time for life”. This tradition continued for the remainder of the century, and in fact, for more than a decade between 1958 and 1969, Omega became the largest manufacturer of COSC-certified chronometers.

The Constellation was born in 1952, essentially a successor to the Centenary watch of 1948 that was designed to commemorate the 100th anniversary of the company’s Biel watch factory. The Centenary was Omega’s first automatic chronometer-grade watch. According to Omega, the model was such a success that the decision was made to design a new collection that could be mass-produced, versus the total production run of 6000 Centenary pieces.

The Constellation was designed to be a flagship model and a true test of Omega’s engineering and watchmaking prowess. The first of the Constellation models were equipped with the caliber 354, which is what is known as a “bumper automatic”. As opposed to the modern automatic winding rotor, which makes a full 360° rotation, the “bumpers” in these early automatics only travel a short direction before being hitting a spring that reverses their movement. Not long after, in 1955, Omega introduced the 500 series of movements, which made the switch to the full rotor system used in modern watchmaking.

The 500 series calibers are widely considered to be some of the finest movements Omega has ever manufactured. The caliber 561 is a 24-jewel movement that beats at 19 800 vibrations per hour and features bi-directional automatic winding and a power reserve of 48 hours. The technical achievements of Omega in the production of these movements cannot be understated: in a time when modern precision-engineering equipment was unavailable, Omega was able to mass-produce an absolute workhorse caliber that was still refined and well-finished – the movements feature a black polished swan neck regulator and the rich red hue of copper plating on the bridges and winding rotor.

Dial variations include the so-called “pie-pan” (see cover page), so named because of the geometric, 12-sided raised dial framed by polished arrow-head hour markers, and the dome dial (below). The pie pan remains the most highly sought-after as this is considered the most iconic dial variant. 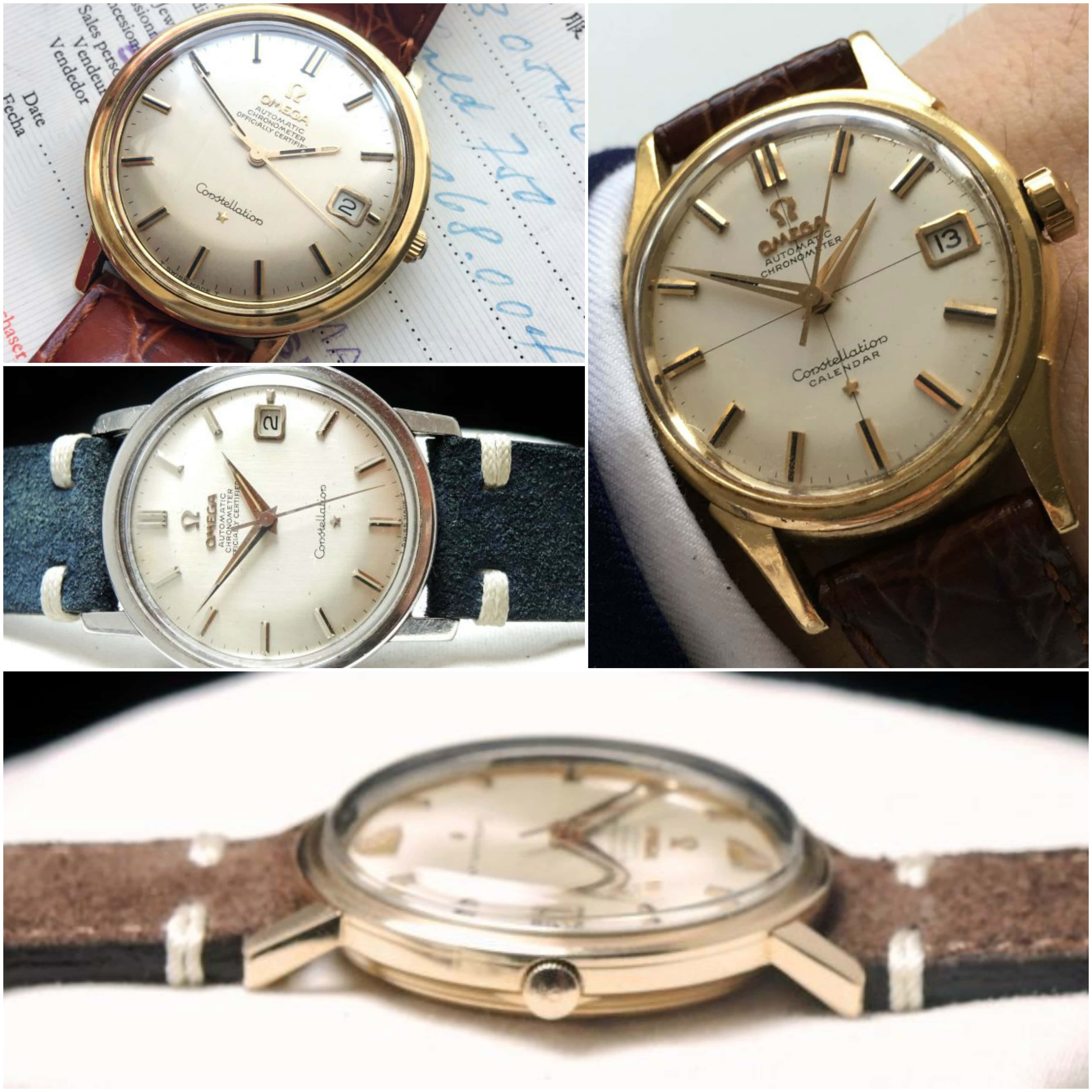 The dome dial, however, offers a far cleaner and less ostentatious look and is thus the ideal dress watch. More importantly, dome dial models are generally significantly cheaper than pie pans, though the two share the same movement!

The classic Constellation case shape, with the crab-leg or straight lugs, was maintained until 1964, when Omega introduced a new case known as the “C-Case” because of the resemblance of the case to two interlocking “C”s.

The integrated lug shape fit the Zeitgeist of the space age and led to the Constellation’s new larger and more imposing, borderline cushion-shape appearance. The flat dial of these models is complemented by thin, baton-style indices and hands that are a radical departure from the baroque and extravagant aesthetic of the past decade. The Ref. 168.0057 marks the final C-Case reference before the style was retired in 1978. The later references featured a knurled bezel, similar to the fluted bezel of the Rolex Datejust (below, bottom row, left). 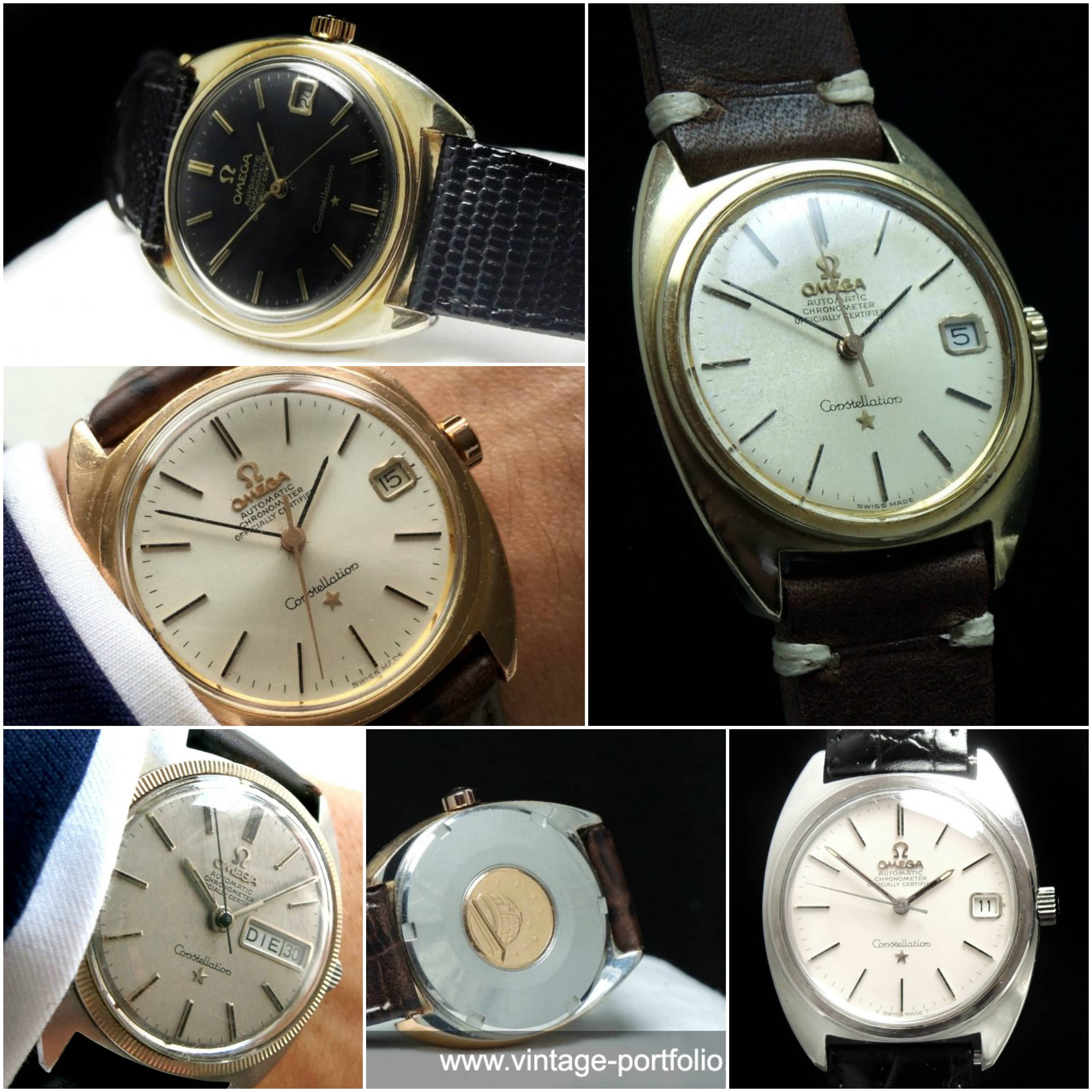 The precious-metal Constellation variants were sold under two lines: the Constellation Deluxe, which was only available in 18k gold with solid gold dial, applied gold indexes on the dial, and the flagship Constellation Grande Luxe, available in gold and platinum with corresponding dials and a Reinhor “Brick link” bracelet, also in precious metal.

Below are three Constellation De Luxe models that show the breadth of the model range: the first, an 18k pie-pan, is executed in 18k rose gold. The second, an 18k yellow gold dome dial example, features indices inlaid with onyx. The third is a pie-pan dial similar to the first, though this time in 18k yellow gold. Note the solid gold dial that matches the case material.

The Constellation name is still a part of Omega’s catalogue and the models offered under the Constellation name are a direct continuation of the “Manhattan design family released in 1982. Originally, the four claw-like “griffes” on both sides of the bezel served a functional purpose, namely to ensure water resistance by fixing the sapphire crystal in place. The claws, though no longer necessary from a technical standpoint, are still maintained to establish design continuity.

The above watch is the Omega Globemaster Annual Calendar Co-Axial Master Chronometer. Though the Globemaster is only loosely a member of the modern Constellation line, it is the true spiritual successor to the Constellation models of the 20th century, and the design cues are easy to see: the pie-pan dial is a direct reference to the earliest iteration of Constellation models. The lugs are reminiscent of the integrated, flowing case design of a later era in the Constellation’s history, namely that of the C-Case from the 1970s. The fluted bezel, this time in tungsten, hearkens back to the final C-Case references in the 1970s. The Globemaster is equipped with the latest in materials science and features a silicon balance spring and a Co-Axial escapement. First, the movement alone, then the fully cased watch are subject to rigorous testing by METAS until they are worthy of the Master Chronometer certification, proving that, to this day, much as in the early 1900s, Omega is dedicated to the pursuit of perfection and to timekeeping accuracy.