Welcome to our series titled Vintage Masters, in which we will take a closer look at vintage watches that have stood the test of time and remain classics to this day.

Omega’s history with manufacturing waterproof watches began in 1932 with the ref 679 Omega Marine, a watch that guaranteed hermeticity to a depth of 135m by way of an outer case that could be clipped onto the inner case, creating a seal that would become tighter as external pressure increased. Additionally, the crown was placed on top of the movement, inside the outer case, to prevent damage from shearing. Other technological innovations for the time were the inclusion of a sapphire crystal, one of its first uses in a wristwatch. Far from the distinctly purpose-built design of the Marine, the first Seamasters of 1948 were created as durable everyday watches, hardy enough to withstand the shocks, bumps, and splashes of day-to-day wear. The “toolish” aesthetic that has now become one of the defining characteristics of dive watches remained absent.

This all changed in the age of exploration, which gave birth to watches built for specific purposes and professions. The ‘50s saw the creation of the dive watch, the racing watch, the engineer’s watch, and the pilot’s watch (e.g. Univérsal Genève Polerouter). Omega capitalized on this trend by releasing a set of three “Professional” watches in 1957, with each dedicated to a specific target group of individuals: Seamaster, Speedmaster, and Railmaster. 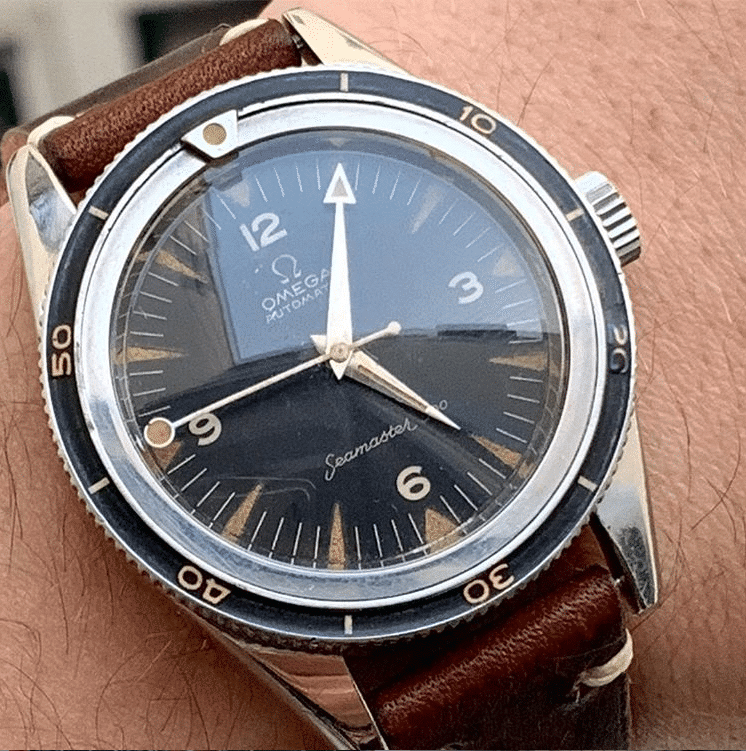 The Seamaster 300 (SM300), CK 2913, was Omega’s first dedicated dive watch. In terms of aesthetics, it ushered in the era of modern dive watches at Omega, featuring a rotating dive bezel, an automatic movement, and in a bit of a misnomer, water resistance of up to 200 meters thanks to its double crown seals and extraordinarily thick crystal. Omega felt that measurement technology was insufficiently advanced at that time to measure the watch’s true capabilities and insisted that the watch’s true water resistance exceeded the “official” depth rating.

The SM300 gained a reputation as being a true tool watch, able to withstand the harshest environments and still remain a highly reliable piece of equipment. Frenchman Alain Julien, a commercial diver who wore his 300 on a daily basis in 1958-1959 wrote the following:

“The Seamasters are of extraordinary solidarity and precision. No other watch competing with Omega has ever resisted the hardships linked to such underwater work as seabed prospecting, pipe laying, repair of works such as piers and dams, and recovery work on wrecks. The Seamaster 300s presented no defects. Despite the shocks of often extreme brutality, the cold water, and the great depths at which we work, they remained of an astonishing robustness and precision. By way of indication, each of us has dived more than 1,500 times.” 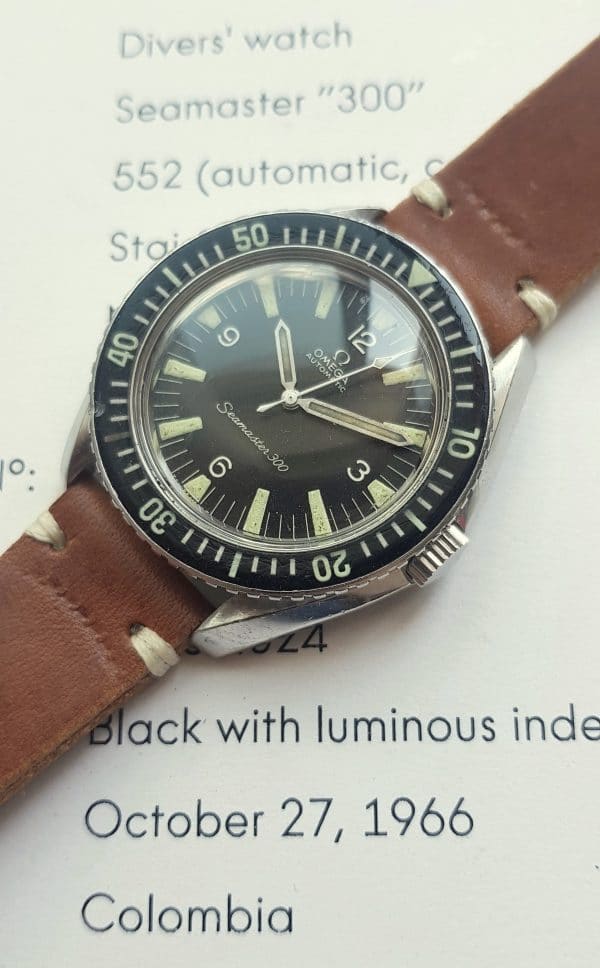 As Rolex still had patent protection on the screw-down crown, Omega developed the Naiad (Greek for water nymph) crown, which created an ever-tightening seal as the diver swam deeper (a technology similar to the one adopted by “supercompressor” cases found in JLC dive watches). The Naiad crown proved prone to leakage in shallow depths, so Omega switched to screw-down crowns in later production. Two years later, in 1964, the bezel of the SM300 was slightly modified with a large luminous index at 12 and clearer numerals. This reference was put to the test by legendary ocean researcher Jacques-Yves Cousteau on his Precontinent II Expeditions in the Red Sea in 1963 that were designed to prove that divers could live and work in saturate gas environments for long periods of time without adverse effects.

There is a dizzying array of Seamaster 300 configurations, so here is a brief overview of the evolution of the Seamaster 300 before we break down the differences in depth by broadly classifying the references as having either “thick” or “thin” bezels, as seen in the below picture.

1962: The early 1960’s Seamaster 300s had straight lugs, and 1962 could be considered a transitional year for the model. As you can see from the first two pictures in the collage above, both models with baton hands (image 1) and models with the combination of a dauphine hour hand and arrow minute hand (image 2) were manufactured. Also note the subtle dial differences between these two “thin bezel” Seamaster 300 Ref. 165.014: the hour markers of the example in image 1 are rectangular, with trapezoidal markings at the quarters. The Seamaster 300 in image 2 features thin triangular indices and short triangle markers at the quarters. Finally, the font thickness of the reference in image 1 is noticeably thinner, with open 6 and 9,versus that in image 2.

Categorization of the “thin bezel” references is no easy task

There are several sub-references for the main reference numbers and complicating matters even further, Omega often continued using parts inventories from earlier references and sub-references until the stock was used up entirely. This results in genuine, “non-Frankenwatches”, that do not fit records of dial / hand combinations. Below is a detailed list of the three main “thin-bezel” references and their characteristics:

The “transitional” Seamaster 300 reference represents the third generation of the model line and features traits of both “thin bezel” (first and second generation) and “thick bezel” (fourth generation and later) Seamaster 300 models. The early transitional 165.014 models (prior to 1963) were outfitted with the 2nd generation 14755 dial (with closed 6es and 9s) and thin arrow or candlestick hands (see below picture, far left). Models dated 1963 and later came with the open fourth generation 165.024 dial (with open 6es and 9s) and candlestick hands, which we traditionally associate with the thick-bezeled models. This final variant, with the dial and hands of a regular “thick-bezeled” Seamaster 300, is the most common 165.014.

This picture shows three legitimate examples of the 165.014 “transitional” Seamaster 300, with the last one (exhibiting open 6es and 9s and candlestick hands) being the most common

1964: 1964 saw the evolution of the Seamaster 300 in three ways – first, the lugs adopted the characteristic bombé (or lyre) lugs that have come to define many of Omega’s most recognizable models. Secondly, the “thick bezel” style was adopted. Third, the case shape became slightly asymmetrical to accommodate the shouldering structure for the crown. Finally, in 1967, the sword hour hands made their first appearance (image 4). Between the two images 3 and 4, apart from the different hour hand styles (baton in image 3, sword in image 4), the primary difference (and the one that lends its name to the model in image four) is the “big triangle” index at 12, which replaces the Arabic numeral. Also note the presence of the date aperture at 3 o’clock.

Above, on the left, you can see early and incredibly valuable “thin bezel” Seamaster 300 references with closed 6 and 9 and lollipop seconds hands. The watch on the left is a 14755  third-generation reference; the watch on the right belongs to the Ref. 2913 family of Seamaster 300 variants. Despite the similarities, the two watches differ in one key feature, namely in their handset: the reference on the right is outfitted with a “broad arrow” hour hand and dauphine minutes hand versus the dauphine hour and arrow minutes hand of the other.

On the right are three “thick” bezel Seamaster 300s. Note the use of different hour hands: the two references on the right have sword hour hands and are likely later (post-1967 models) versus the earlier 1964-1967 baton-hour-hand example on the far left.

Now, you’re probably slightly overwhelmed, so to sum up:

… which is also evident in the above pictures. The taller, more-prononced domed caseback is a feature of the 2913, which featured the thicker cal. 501 (5.55mm height) versus the more svelte cal. 551 (4.5mm height) introduced later.

First, a word of warning. Whenever purchasing vintage timepieces, buy the seller: buying from a reputable dealer is part of making an informed decision. Frankenwatches, in case you do not know, are watches whose parts, though all original manufacture Omega parts, are sourced from different models and time periods, resulting in a watch that looks authentic but is actually cobbled together. 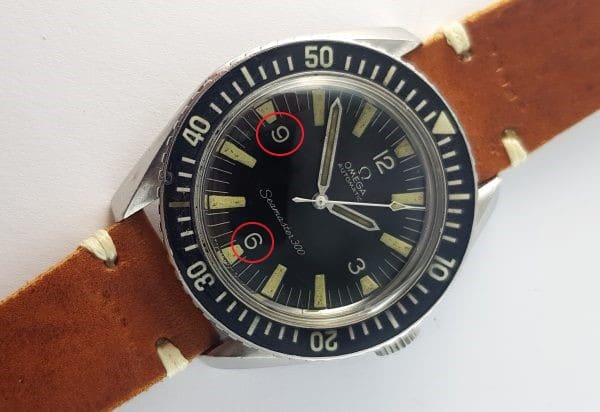 Note the open 6 and 9 (circled in red) and even patina, with the bezel index color matching that of the hour indices 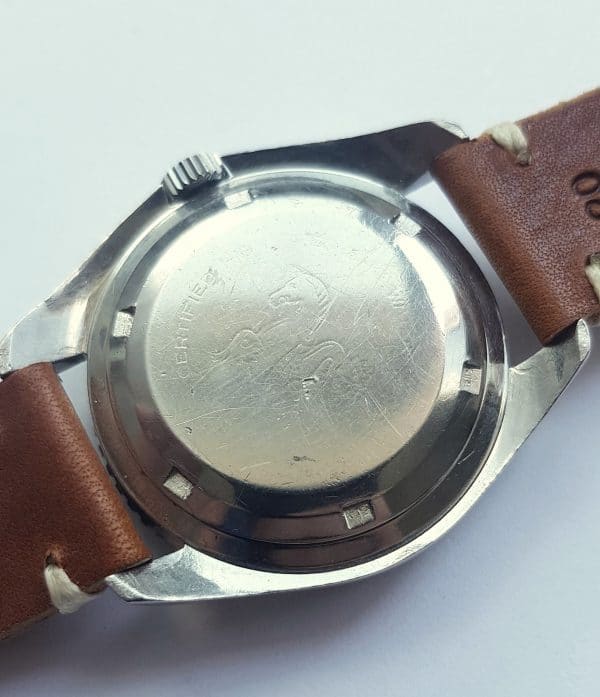 The dive watch as a fashion icon and must-have part of every watch collection has come a long way from its inception in 1953 with the Blancpain Fity Fathoms, closely tailed by the Rolex Submariner of 1954 and the Omega CK 2913 of 1957. Of these three brands, it was Omega that unwaveringly and uncompromisingly pushed the limits of their technology further and further still. The SM300 was followed by the Seamaster 600 and the Seamaster 1000, released in 1970 and 1971, respectively, with the development of the “ultimate” dive watch culminating in the PloProf. The SM300 remains an icon and, at 41mm, is hardly undersized by modern sensibilities.

Whether you are in formal or casual attire, this is a watch that will certainly draw praise! Yours truly certainly enjoyed the experience of having one on his wrist!