On the left is the Patek Philippe Nautilus Ref. 5712/1A in stainless steel. One of the most endearing designs from arguably the greatest watchmaking company in history, the Nautilus was Patek Philippe’s answer to the Audemars Piguet Royal Oak as the two companies struggled to stay relevant in the new era of the quartz watch. They did so by elevating the watch from its role as a mere timekeeping tool to a status symbol and a means of exhibiting deep pockets. In the forty years since, the Nautilus has solidified its position as one of the most coveted stainless steel sports watches of all time, perhaps matched only by the Rolex Cosmograph Daytona and the Royal Oak. The sticker price reflects this reality: this reference will run you close to €40 000 on the grey market.

On the right is the Polerouter, an often-overlooked vintage model first introduced in 1954 by the now-dormant company Universal Genève, this is a watch that can be had for less than €2000. Universal Genève, formed in 1894, was formerly one of the biggest players in the watch industry. Outside the watch community, this brand is largely unknown, despite being responsible for a number of historical “firsts”, including being the first company to manufacture a wristwatch with a chronograph complication. Universal Genève remained a family business until 1967, after which the company was bought out by the Bulova group. In 1986, the company was acquired by the Hong Kong-based investment company Stelux Holdings International, which tried to relaunch the brand in 2001. Universal now oversees Cyma (another Stelux holding) but is more or less dormant, a shadow of its former self.

You would be right in asking the question “what could these two watches possibly have in common?” Surely, the only commonality between them must be that both are models manufactured by companies based in Geneva.

Well, you’ll be surprised to know that the two watches share some common DNA, both inside and out.

The earliest credible evidence for the successful use of self-winding technology in a watch came from the Swiss watchmaker Abraham-Louis Perrelet, who in late 1776 or early 1777 devised a mechanism for pocket watches that used an oscillating weight to energize the mainspring by moving up and down. When wristwatches began to gain traction after the First World War, there was a renewed push by watchmakers to develop self-winding technology to make wristwatches more attractive. John Harwood, a watch repairer from England, obtained a Swiss patent in 1924 for a system that used a pivoting weight that swung as the wearer moved, winding the mainspring with a ratchet mechanism. These early wristwatch automatics were of the type known today as “bumper automatics”, in which the rotor was returned to its original position after pivoting 180° and hitting a set of springs, as opposed to making a full 360° rotation as is common in today’s automatic movements. In 1930, the Rolex Watch Company improved upon the “bumper” automatic design after patenting the Oyster Perpetual, a movement in which a semicircular weight rotates a full 360° around its central axis. It might surprise you to know that this is the exact technology still in use today – very little has changed since those tremendous engineering leaps and bounds in the early 20th century. Certainly, advancements in materials technology has led to the use of different materials for the winding mass attached to the rotor, such as tungsten or precious metals like 22k gold or platinum. Also, at the higher end of the price scale, ceramic bearings are now used in the rotor assembly, negating the necessity of lubricants, which can dry over time and lose their effectiveness. However, the basic principles are the very same as the ones pioneered by Rolex in 1930.

One of the downsides of automatic watches is the increase in thickness that comes from the rotor weight resting on top of the rest of the movement. In addition, the rotor weight obscures a good portion of the movement. These drawbacks were addressed as early as the 1950s. The term micro-rotor refers to a small rotor incorporated into the movement on the same plane as the balance wheel and escapement. The benefits of automatic winding are preserved while at the same time keeping the movement thin. There is slight contention as to who first developed this technology: Universal Genève had been releasing their “Microtor” movements with the inscription “Patent Rights Pending” since 1955, though the Buren Watch Company (later acquired by the Hamilton Watch Company) patented their design in 1954.

The progression of calibers used in the Polerouter: caliber 138 SS, caliber 215, caliber 69

Micro-rotors remain a bit of an eccentric rarity found at the extreme high end of watchmaking. Though the winding efficiency of micro-rotors is not comparable to that of a full rotor, their artistic merits have seen them adopted by notable companies including Patek Phillipe, Chopard L.U.C, Armin Strom, Bulgari, A. Lange & Söhne,  Laurent Ferrier, and Roger Dubuis. 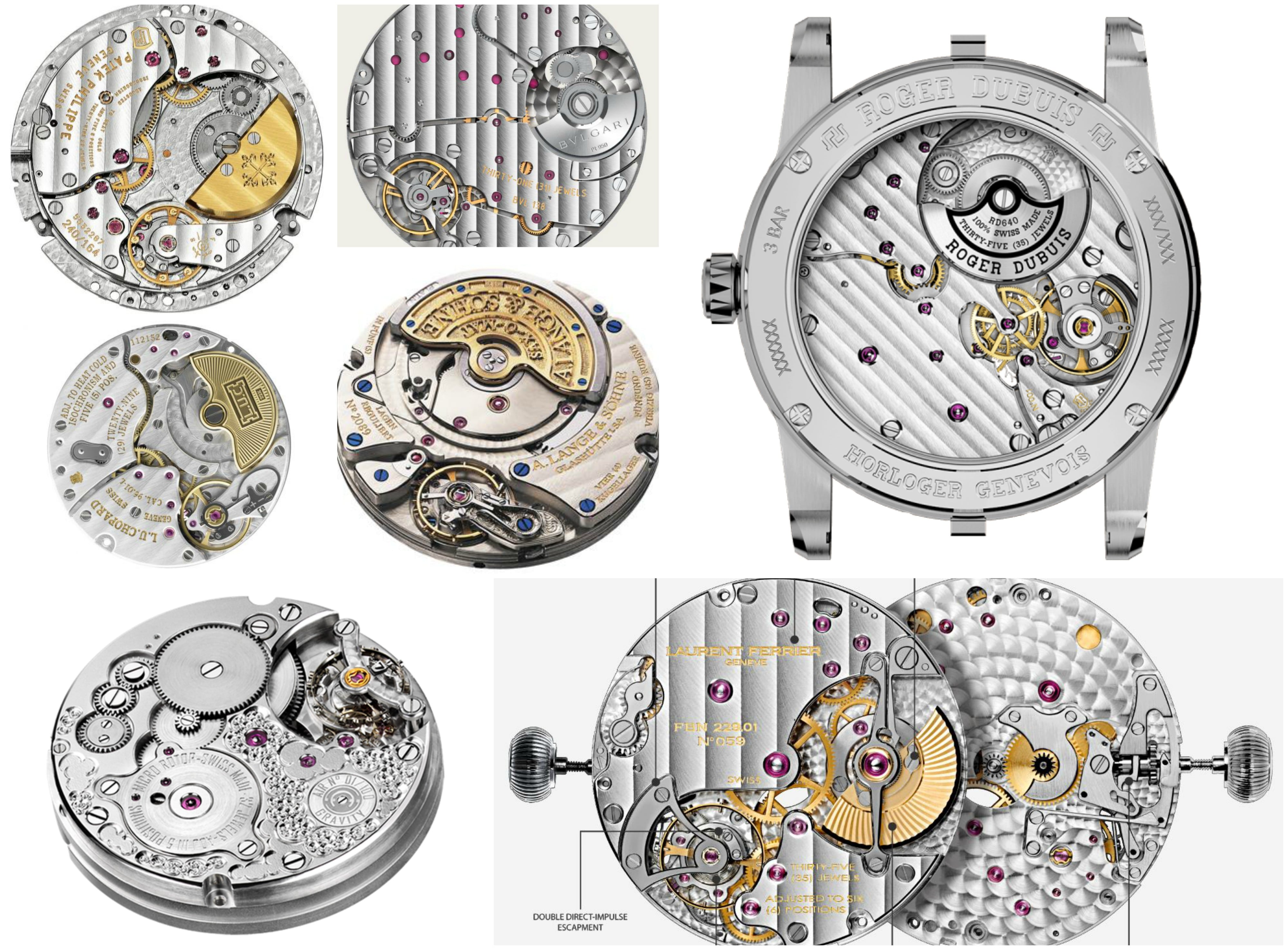 The name Gerald Genta carries tremendous weight in horology. Genta is credited with being the visionary design artist behind some of the most influential watches of all time. The list of all watches on whose design he is known to (or rumored to) have worked is far too vast to list in its entirety, but here are some of the highlights: Universal Genève Polerouter (1954), Audemars Piguet Royal Oak (1970), Patek Philippe Nautilus (1974), IWC Ingenieur (1976), Omega Seamaster, and Omega C-Case Constellation (rumored) among many others. Genta’s work for Universal Genève served as a stepping stone to his future collaborations with other Swiss watchmaking houses, and one of the Polerouter’s most defining characteristics has since become a hallmark of Omega case design, namely the bombé lugs that gracefully curve inward toward the strap or bracelet. Genta’s most famous designs, the Royal Oak and the Nautilus, were polarizing at the time, but they were intended to reflect a new design ethos for a modern era. Both have since become timeless designs, and it is refreshing to know that the young Genta, in creating the Polerouter, was simply laying the foundation for his work to come.

An advertisement for the Polerouter in the German SAS timetable (1957)

It is easy to forget that in their heyday, mechanical watches were far more than the functional jewelry they are now: watches were often at the cutting edge of technology as the engineers behind them sought to push the limits durability to meet the demands of land, sea, and aviation exploration, all while maintaining a high rate of chronometric precision. On April 15, 1954, the Scandinavian Airline System (SAS) flew its first commercial flight over the North Pole in efforts to reduce flight times from Europe to California. The strong magnetic fields around the Poles wreaked havoc on timing instruments, so pilots were issued chronometers by Universal Genève (the official partner of SAS) chosen because of the company’s work with anti-magnetic timepieces. To honor this achievement for the aviation industry, Universal Genève had the young Gerald Genta design a watch that very same year that became known as the Polarouter. The watch, which was fitted with the bumper automatic movement 138 SS, initially featured a 34.5mm case with bombé lugs and a dial with a contrasting textured inner ring.

After the initial success of the watch it was renamed the Polerouter in 1955 and equipped with the brand new caliber 215, which featured a date complication displayed in a unique and playful framed trapezoidal date window. Later models also transitioned from the bombé lug design to more conservative straight lugs. The Polerouter eventually became a model line that spawned a diverse and highly successful family of watches that included the Polerouter Day-Date, Polerouter Sub, Polerouter Compact, and Polerouter Jet to name but some. Though certain models took certain liberties from the design language of the original, they by and large retained the same DNA. 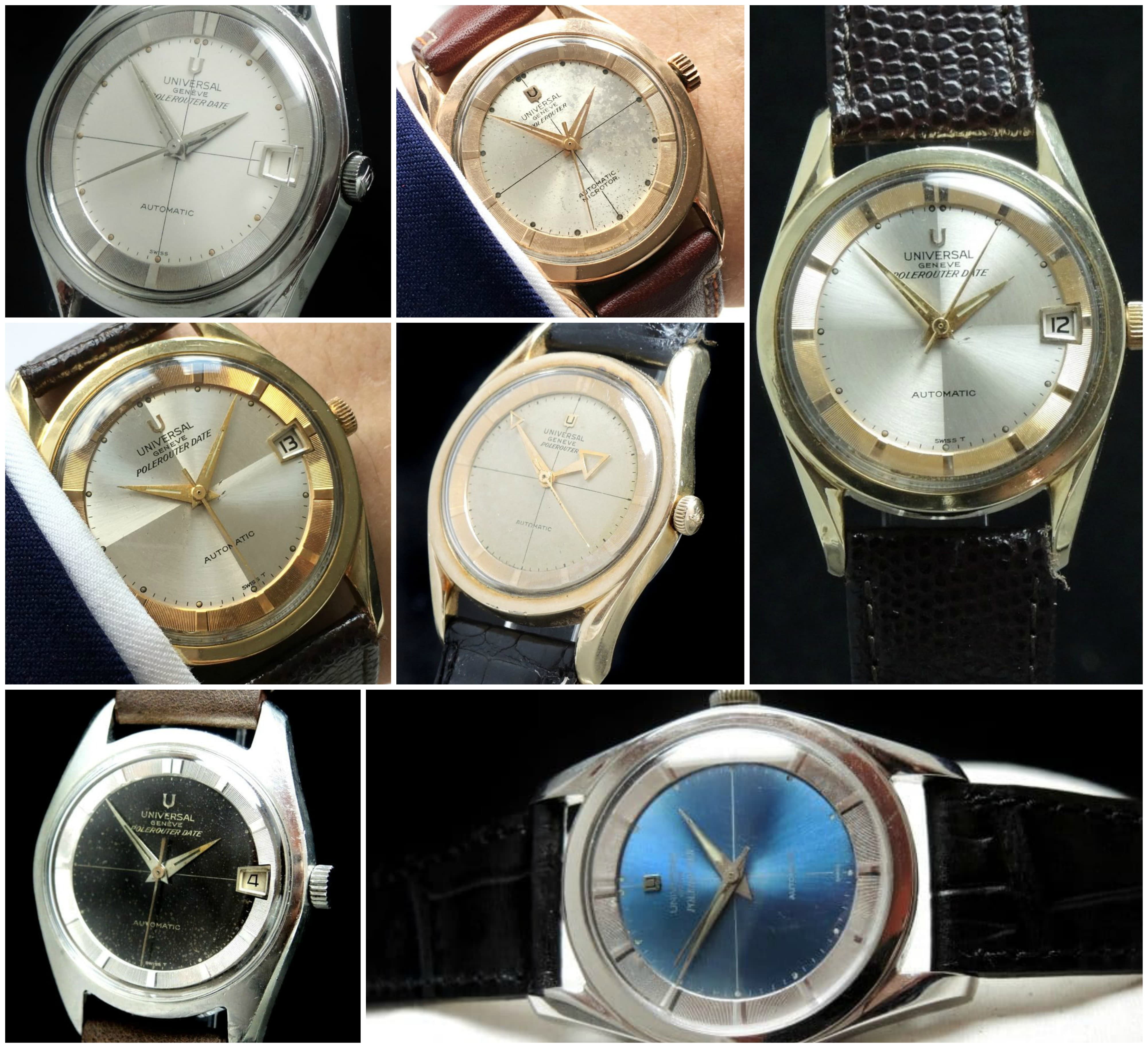 The time has come to return to where we began this story, with the Patek Philippe Nautilus. I am no way suggesting that the Polerouter is the superior watch. However, undeniably, it served in several ways as the foundation upon which the Nautilus was built. Without Gerald Genta’s success and recognition at Universal Genève, would he ever have had the opportunity to collaborate with Patek Philippe? Without Universal Genève’s advancements in micro-rotor technology, would we ever have had movements as breathtaking as the caliber 240 by Patek Philippe? It does make you wonder what might have happened if history had been kinder to Universal Genève…. Who knows, maybe this is a brand that will be revived after a long dormancy and take the world by storm, similar to what A. Lange & Söhne did in the 1990s or the way Tudor has recently made a comeback and is now experiencing a surge in popularity.

Only time will tell.

Posted in Vintage Watches.
Share
←  NewerCaliber 33,3: The Ancestor of an Icon
Older  →The Pursuit of Timekeeping Accuracy: Omega Constellation